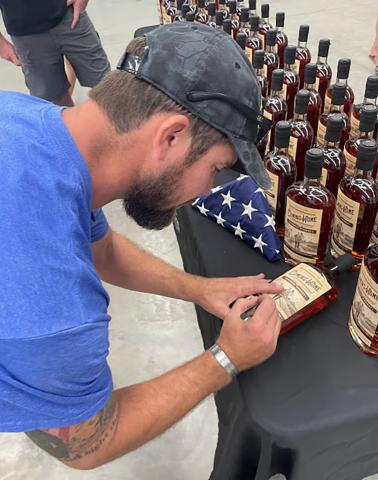 Veterans will be honored and thanked in a big way on Main Street in Lakota on Veterans Day, Friday November 11. The spotlight will shine brightly on Veterans and Veterans’ widows during the annual Hunting with Heroes drive-through Thanksgiving meal and gift distribution event.

This will be the third year for the free drive-through format which will be held from 3 to 6 p.m. rain or shine. Volunteers, some of which will be Veterans, will place in each Veterans or Veterans’ widows’ vehicle in the drive-through a free ham, five pounds of potatoes, a can of cranberries, two cans of green beans, two cans of cream of mushroom soup, one pumpkin pie and soda products.

In addition, Veterans or their widows will each receive a $20 gift card and a chance to win a commemorative rifle. Many other giveaways for hats, t-shirts and gift cards are planned. Patriotic displays of flags and law enforcement and race cars will line the streets of the drive-through route.

The 2021 goal of honoring 450 Veterans was exceeded as the event saw 534 Veterans or Veteran’s widows participate last year. One of the event organizers, Bernie Becker, said he is expecting at least 600 people this year depending on the weather. He said the event received a lot more exposure during the racing season and he expects a big crowd.

“The only change we did this year is, there will be 500 complete food meals given away plus a gift card through the drive-through. After 500, we will be giving gift certificates equal to the value of the meal plus a $20 gift card also that everybody will get...we just don’t have the place to store that much stuff,” Becker said.

The drive-through event replaces the annual traditional banquet which had to be discontinued because the event just outgrew capacity of the Eagle Banquet Center where it had been held since 2011.

“What was an event that originally hosted four wounded warriors and had a banquet for 125 local veterans has grown into multiple events and substantially more Veterans served each year,” organizer Jason Becker said.

“The event has grown to such a large amount of people...the drive through gives us the best chance to serve as many Veterans as possible, but still pull off an amazing event and display.”

Focus on the heroes

The day to honor Veterans comes at the end of a week where the greater Lakota community will play host to 10 veterans for a week of hunting and fellowship. Four of the 10 veterans have been in Lakota for the event before.

Each year since Hunting with Heroes was formed, a group of veterans from a wounded combat battalion stationed in Camp Lejeune, N.C. and a handful of alumni from previous years arrive in Iowa in November to hunt for a week. All their airplane fares, lodging, meals, guns and ammunition are donated by sponsors.

This year’s Veterans’ group will arrive at the Des Moines International Airport on November 7. The first stop will be Hilton Coliseum in Ames where the Iowa State volleyball team members will be serving the Veterans noon lunch.

Becker said each new veteran in the group receives their own new shotgun. That afternoon they will spend time at the Isaak Walton League in Ames getting comfortable shooting the guns and going over gun safety hunting rules.

That evening the veterans will be featured guests at the Iowa State University mens’ basketball game at Hilton Coliseum and introduced to the crowd at center court during half-time of the game.

The group will be staying in top of the line motor homes and will go pheasant hunting on Wednesday and Thursday.

“We have some fantastic landowners in the Lakota area who have saved back over 1,000 acres just for these guys to hunt. Nobody gets to hunt it until these guys do. It is so appreciated,” Becker said.

The group will also spend a morning pheasant hunting in the Whittemore area. Depending on the conditions, they might also have the chance to go duck and goose hunting.

The official launch of S&B Farms Distillery’s newest product “Coming Home” a bourbon inspired by the wounded warrior guests as well as all members who have returned home from their service through the years will be held at the Patriot Bar and Grill in Lakota at 6:30 p.m. following the drive-through.

“With only 50 bottles available, and each being signed by wounded warriors and numbered, this is a once in a lifetime opportunity to bid on some of the first bottles through an auction, in addition to a signature cocktail being served by the Patriot Bar and Grill featuring the spirit, which will be used as a fundraiser,” Jason said.

“It is such an exciting project because our wounded warriors were involved in the development, naming, creation of product and concept every step of the way with S&B Farms Distillery. All profits will be generously donated to Hunting with Heroes. This bourbon is made from local corn, was distilled by S&B Farms Distillery, and has an incredible label designed by local artist Cathy Haugland of Avalon Rose Design. It is unapologetically American, and unbelievably local.”

Hunting with Heroes was created by the father and son team of Bernie and Jason and though neither are Veterans themselves, patriotism runs deep in their family as Bernie’s father and Jason’s grandfather, Arnold Becker, was a World War II Veteran who was in Pearl Harbor when it was bombed.

Bernie Becker said he and Jason had only two rules when they started Hunting with Heroes in Lakota.

“That everything for the Veterans is going to be first class, nothing used and everything is going to be the best we can afford. Number two, we want every Veteran we can (to be) reached, make it available to them and widows of Veterans,” Bernie said.

During the year there are other events that Hunting with Heroes sponsors to honor Veterans including special car race nights.

Jason said the most rewarding part of the event is simply spending time with the local and visiting heroes.

“It is all made possible by amazing partners and to see them honor and engage with them is truly special. Additionally, newly all of our wounded warriors are from the conflicts in Iraq or Afghanistan, and those guys absolutely love showing respect and trading stories with the local Veterans,” Jason said.

“Maybe we sound like a broken record, but the support we get each year is truly amazing. We don’t have any paid staff or leadership, no one has ever been paid for their efforts so we depend upon people and their time treasure and talents to make it work,”

“There are literally dozens of people that make this event work and without them, Hunting With Heroes wouldn’t exist. Landowners, volunteers, hunting guides, business owners and local community members are the lifeblood of this organization. In 2022 those efforts will result in somewhere around 1,400 Veterans being supported in person at our events.”