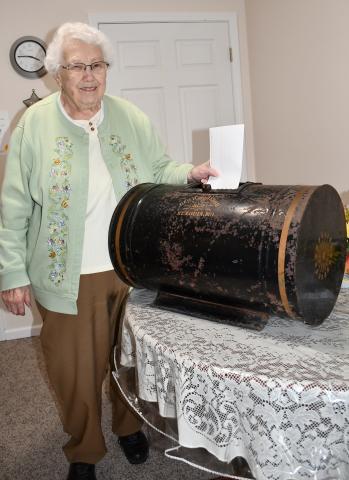 As election day approaches, people often cringe at the thought of political debates, endless commercials seeking to sway voters, and arguments arising between friends who disagree politically. There will be no debates this election season for the residents of Riverview Terrace Assisted Living in Spencer, who are invited to a program by one of their own prior to election day.

Kruse donated the ballot box to the Royal Museum only a few years ago. She had begun to downsize her home with anticipation of moving to Riverview Terrace Assisted Living after losing her late husband Roger. The tin ballot holder was placed for perpetuity in the one-room Royal schoolhouse Riverton No. 8 located behind Royal’s City Hall and Community Center. It has been on display at the Home State Bank in Royal on one occasion under the direction of Royal residents Lynn Cronk and Dave Rainer. This year’s election, the box will be on display at the Royal Community Center, which serves as a county voting precinct on election day.

“My husband Roger served on the Clay Township Board as the township clerk for 32 years,” Kruse said. “I’m not certain how he acquired the ballot box, but I believe it was probably passed onto him by his predecessor on the township board. We kept it in our storeroom for many years, until after the museum had opened and I was preparing to move to town. At that time, I decided it should be donated for display so the public could enjoy it.

She added, “I remember keeping Indian corn in the ballot box with some of my seasonal decorations. The original lock and keys also remained inside. It’s in good condition and has a rich history.”

Kruse noted that the box peaked her interest when she began to study its history prior to donation. The secret-ballot holder is a simple cylinder made of tin and cast-iron, weighing less than 5 pounds. The mule box was designed with a curved base attached to the bottom so it could be strapped to the back of a mule and transported to different polling places.

She said there is no way to know exactly when this box was put into commission for Clay County’s elections, but upon research of various websites it is likely the ballot box could have been used in the early days of the township’s creation, which was in 1859. Clay County was organized only one year prior in 1958.

If so, Kruse explained the significance of the mule ballot box is quite impressive. She will be sharing a brief presentation about the box with her peers at Riverview Terrace and then the box will be shuttled to the Royal Community Center for the voters to view it on election day — minus the mule. The historic ballot box is available for viewing year around at the Royal Museum Riverton No. 8 Schoolhouse.

For the voters, they will find historic information shared alongside the mule ballot box, including interesting details such as the maker’s stamp from George D. Barnard of St. Louis, Missouri. Barnard’s ballot boxes dated to the Civil War era circa 1860s. The boxes would have held the voters’ secret ballots from some amazing historic elections. According to one historic website, a mule ballot box exactly like the Clay County box was used during the 1868 election of Ulysses S. Grant, the 18th President of the United States. American Battlefields.org also explained that presidential election was the first of the Reconstruction Era when Republican nominee Grant defeated Democrat nominee Horatio Seymour. This was also the first presidential election to take place after the conclusion of the American Civil War and the abolition of slavery. Even more interesting, it would have also been the first election in which African Americans could vote in the reconstructed Southern states, in accordance with the First Reconstruction Act.

Surf New Media is building community throughout the country with feel-good, human-interest stories from our clients. If you have an article you would like considered for this service, please email info@surfnewmedia.com.